On the Road in Mexico! 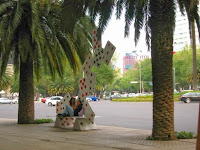 After 8 days in Ohio, I made a pit-stop in New York for less than 48 hours before heading off to Mexico. This gave me just enough time to pay my rent (for the apartment I never see) and other bills (for utilities I don't use) and change the water in the bucket that my plant is sitting in. I came home with one less shoe and a brand new suitcase. After 9 flights in 3 weeks, my old suitcase couldn't go on any longer and is resting in peace in the dumpster behind the Columbus Best Western.

So I packed my new suitcase and was off to Mexico. The first stop was Mexico City. The climate was a moderate and comfortable low-70's. Everyone there seemed to think it was cold because they were all bundled up in winter coats and scarves unless they were protesting something, in which case they were standing in the street naked. The city was crowded with people and traffic (about 10 times more than NYC) but really colorful with beautiful views of mountains and volcanoes. I especially liked that all of the streets were lined with benches that were each a unique sculpture. I was only in Mexico City for a few days before flying off to Veracruz so I didn't get to see any museums but I did take a tour of the Pyramids. The tour stops at several churches and archaeological sites on the way but the most interesting stop 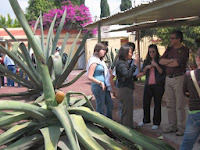 was the Maguey shop. We got to watch how the artisans make things out of obsidian which comes from the volcanic lava and how the silversmith turns the silver into jewelry but the most intriguing demonstration was where they showed us all the ways they use the agave plant. First, they peeled the skin of one of the leaves to create paper. You can write on it with a pen and the ink won't smudge. Then if you rub the leaf it will create a film that is used for antiseptic. Break off the tip of the leaf and the sharp point is used for a needle. Attached to it are long strands that are used as thread. Lastly, inside the plant itself, they stir the pulp to create the liquid that is fermented to make tequila. This part of the demonstration involved getting us drunk off of pure agave juice, mescal, and tequila. This was great but probably would have been better after the climb to the top of two pyramids!


After that, we went to the Pyramids of the Teotihuacan. I climbed to the top of both the Pyramid of the Sun and the Moon. The climb up was pretty treacherous and steep. It's helpful to have really long legs (which I don't) because the stairs are very high but once you get to the top the view is worth the effort. There were butterflies flying all around me. I felt like they followed me on my journey across the U.S. and we all migrated together from North America to get to this place! They only added to the surreal feeling of being someplace so ancient that so many others throughout history have climbed before me. If you've never climbed to the top of a pyramid then I highly recommend putting it on your to-do list because it was an absolutely amazing experience.


The next day I flew to Veracruz. I don't have much to report about this trip because I was advised by my local site contact to stay close to my hotel due to the unsafe conditions in the area. This

part of Mexico was not a tourist destination but this was the real Mexico that most tourists never see. People were living in extreme poverty (mostly Third-world conditions) and scavenging what was supposed to be a beach but looked more like a garbage dump.

It was about 20 degrees warmer than Mexico City... approximately 90 sticky degrees every day.

Now I'm in Montreal, Canada and it feels like it's been a year rather than a week since I was in Mexico. Probably because I flew out Summer and straight into Winter! The leaves here have already changed to yellow and orange and from what I've seen of Montreal so far it looks like a beautiful city. My brain is having a bit of a meltdown though. I'm finally remembering my room number and floor but now have to remember to speak in French rather than Spanish. It also would have been useful information to know that there are 5 Marriott hotels here. Two are on the same street. Luckily, I found mine on the second try.

It's been almost 9 weeks and I've been in about 15 different cities and on 15 flights with one more flight to go (back home to New York!). This will be my last trip for a while and I'm hoping to see some great museums while I'm here so check back next week for the last of the "On the Road" blogs.
Posted by Kim