The League of Freaks 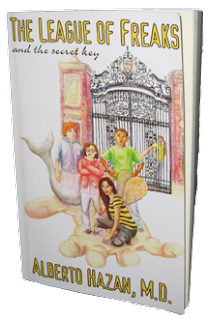 You can also buy a copy directly through the "League of Freaks" website using PayPal.

Both the book and website were designed and illustrated by Kim Wagner Designs.

"Embrace your differences. That's what Shree Mandvi's father is always telling her. If only he knew just how different she really is. It's not being an Indian-American from the Bronx that makes Shree stand out at her new school. It's turning into a bee that does. And if that wasn't weird enough, Shree also discovers a map-filled book from the 1600s claiming that there's hidden treasure-and a mysterious secret key-lost somewhere under the campus of Harvard University. With the help of four freaky new friends, Shree must race to solve an ancient riddle. If she succeeds, she will unlock the final door that leads not only to the treasure-but perhaps to death as well. Can she summon her powers in time to save herself and her friends?"
Visit: http://www.theleagueoffreaks.com/
Posted by Kim No comments:

NOT on the road in Canada

You might have noticed that the "On the Road" blogs came to an unexpected end. After the Massachusetts trip, I was scheduled to go to Ottawa. I had a difficult time finding a plane ticket costing less than $1,500 and discovered that there are no direct flights from New York to Ottawa. The shortest trip would have involved not one but two layovers.

The best I could do was postpone the trip for a week so that I could secure a ticket that would get me to Canada with just one layover and at a comparably reasonable price of $875. Since the ticket was so pricey I tried to save money by booking a hotel and car for just one day. The total cost of this one day adventure to Ottawa was $1000.

On the morning of my trip, I left my house at 7am. I flew from New York Laguardia Airport to Washington, D.C. where I had a two-hour layover. From there I took a flight from D.C. to Ottawa.
Those of you who read my post in 2008, "On the Road in Montreal", will know that I had a little trouble getting through customs due to some confusion over business permits (which it turned out I didn't need) and after being questioned and held by immigration for an hour or so, I was allowed to enter the country.

This time I wasn't so lucky.

Because of the trouble I had on the previous trip, I was advised to say that I was there for pleasure rather than business so that I would be allowed in with no problems. What I didn't know was that there had been a flag on my passport from the previous trip. I simply checked the box on the form that said "pleasure" and when I went through Customs they told me to go to the Immigration Office and then I'd be "on my way." Only they didn't specify where I'd be on my way to.

The Immigration officer I encountered was not a very pleasant or friendly man. I was interrogated and accused of outlandish things such as "trying to steal Canadian jobs" and "trying to Emigrate to Canada." He told me he wanted to "teach me a lesson" and that my entry to Canada would be denied or else I could sit in jail for a few days and await a hearing. I chose to be "on my way" back to New York. Except I found out that they were only obligated to send me back to my last point of origin which was Washington, D.C. So I spent the next 5 hours watching people board direct flights back to Laguardia while I waited for my flight to D.C. but not before I was escorted by two very large armed men in bullet-proof vests and paraded through the airport like a terrorist. When I asked if the reason for my being deported was because I checked off "personal," the Immigration Officer told me he would've sent me home even if I checked off "business". The reason being that I didn't have the proper permits--but if you read "On the Road in Montreal" you already know that it was discovered I did NOT, in fact, need a permit to do my job! In this situation, I felt the only thing I could do was surrender to this man's insanity and go home without seeing any new museums (or even stepping foot in Canada) resulting in the disappointment of my many loyal readers.

My last On the Road adventure took me on 17 hour door to door journey involving 4 flights and two trips to Washington Dulles Airport all in one day. For the rest of my life I will not be allowed into Canada (not that I have any vacations planned!) without being questioned by Immigration and the only thing I have to show for my exciting journey is this picture. 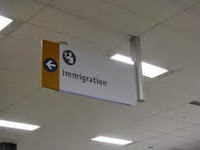