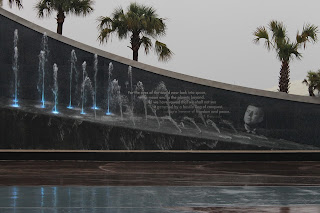 Kennedy Space Center is a major central Florida tourist destination and is approximately one hour's drive from the Orlando area. Located on Merritt Island, the space center is north-northwest of Cape Canaveral on the Atlantic Ocean, on what's referred to as Florida's Space Coast. 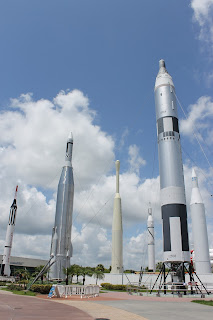 The admission cost per person was $50, which in my personal opinion was not worth it. In addition to that, you have to pay a $10 parking fee to park your car on their dirt lot.

The Kennedy Space Center Visitor Complex offers public tours of the center and Cape Canaveral Air Force Station. What they don't tell you is that this is not included with your $50 admission fee. You have to pay extra to take the tour.

What you do get to see for $50 are these rockets in this photo on the left. Then there are several separate buildings that house various space-related exhibits. Much of it is sitting in dark rooms and watching movies. For example, in one building we sat in a dark room and watched a video about being able to live on Mars one day. There were a few interactive components in that building as well but most of the exhibit was centered around the film which repeated over and over until the point where we couldn't stand it anymore and had to leave without seeing the entire exhibit.

To get from one building to the other you need to walk outdoors. On our way to the next building, a bird pooped on my head. I will admit that having bird poop in my hair, plus the overpriced admission fee, and then the torrential downpour which left us unable to get from one building to another without getting completely soaked, possibly added to my negative review of the space center. 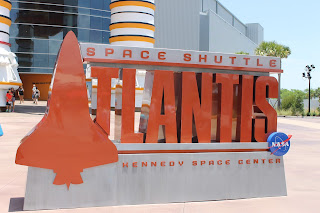 At the next exhibit, we had to wait on a long line. Then we were corralled into a room where we had to watch another movie before we could enter the exhibit area. There was a lot of build-up to this grand entrance that I felt was a letdown. After the movie ended two large doors opened up to a room housing the Space Shuttle Atlantis. Yes, this part was very cool but I just felt that the whole movie watching and build up to it was a bit over-dramatic. This exhibit area was full of interesting interactive components. You could go inside a mock-cockpit of the space shuttle. There was another video of what it's like for the astronauts to eat, sleep, and use the bathroom in zero gravity. 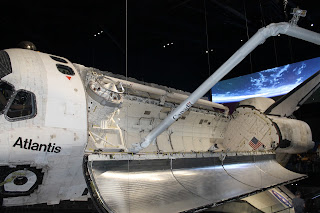 Much of this section was geared toward children, such as this giant slide in the photo below. There wasn't much information about what the slide was supposed to represent but then I finally figured out (when viewed far away from the side) that it was supposed to represent the angle at which the space shuttle descends when it lands back on Earth. I'm pretty sure this information was lost on the children but the slide was pretty fun anyway. Wheeeeee! 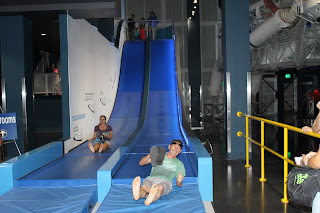 There was also a clear maze-like tube hanging from the ceiling that the children could crawl through, somewhat like a giant gerbil tube. It was too small for adults to fit and I'm not sure what the message was about there either. Depending on the child, this could either be terrifying or really cool.

We also wanted to go in the simulator which replicates what it feels like during the shuttle take-off. This was a bit of a process. You had to rent a locker to store all of your personal items. I'm not really sure why. Then there was a long wait in line. To break up the monotony they placed video screens along the way showing - you guessed it! - more videos. Then before entering the simulator we had to watch yet another movie which made it seem like the simulator was going to be a big deal and pretty scary so I started to change my mind about going in. However, I had gone in the simulator at the Houston Space Center so I figured it would be the same thing. It was probably the best part of the whole exhibit but again the whole dramatic build-up towards it was anti-climatic. The wait in line and the movie were longer than the actual simulation which I think was about three minutes.

Maybe I'm a bit of a Space Center snob because I had already been to the Houston Space Center which I think is a lot better than Kennedy Space Center but what I was disappointed about the most was the tribute to the Astronauts of the Space Shuttle Challenger.
I was in 2nd grade when the Challenger exploded off the coast of Cape Canaveral on January 28, 1986, yet I remember it so clearly. My teacher had arranged for a television to be set up in our classroom so that we could watch this momentous event. Christa McCauliffe was the lucky teacher who was going to get to go into outer space. In 1984 President Reagan announced the Teacher in Space Project. NASA wanted to find the first civilian, an educator, to fly into space. They wanted to find an "ordinary person," a teacher who could communicate with students while in orbit. McAuliffe was chosen out of more than 11,000 applicants including my 2nd-grade teacher. After all those months of training and the constant chatter on the news, they barely made it off the ground. In 73 seconds seven people were dead. Our whole class watched it live on the television and it's something that even at that age I could never forget. When I think about that day this image below is the exact picture that still remains in my mind. I don't think I really understood the magnitude of what had happened until my teacher collapsed in her chair and cried. 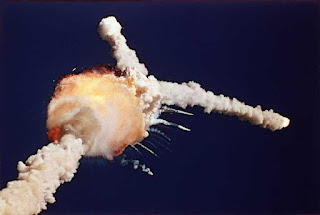 NASA hoped that sending a teacher into space would increase public interest in the Space Shuttle program, and also demonstrate the reliability of space flight at at time when the agency was under continuous pressure to find financial support but it wound up being a big fat tragic fail. That's why I wanted to make sure there was a big tribute to the seven people who lost their lives or at least a mention of it but I had to search the entire exhibit hall. Finally, there it was, hidden away and covered up like a scar they wanted to hide, tucked into a dark corner where no one would notice unless they were trying very hard to find it. 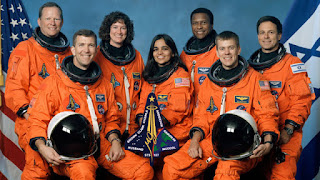 I'm not positive but I think you can purchase some sort of all-in-one pass to Universal Studios, Disney World, the Space Center and other Orlando attractions. In this case, I would say it's worth a visit as long as you bring some sunscreen and an umbrella to protect you from sudden downpours and random bird droppings!