One of the places that came to my mind when thinking about this was the Lower East Side Tenement Museum. Located on 97 Orchard Street in New York City's Lower East Side, the museum is a tenement that was built in 1863 and tells the stories of the nearly 7000 working-class immigrants who lived there. 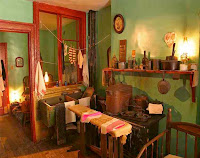 There's no cutting edge technology or expensive exhibits. You might expect that the building would have been renovated to show what it looked like in 1863 but they have endeavored to keep it preserved in the state that it was purchased in 1988. Only small sections of the tenement have been restored in an effort to intimately illustrate the lives of the families who inhabited the apartment at various points in the building's history. Each apartment tells a different story and each visit is a different and unique experience. The museum is only viewed by guided one hour tours and there are several different tours to choose from in which you will learn about an Italian, Irish, German or Jewish immigrant family. On each tour, you will be walked through the tenement by a tour guide who will reconstruct the lives and struggles of the families who started new lives in America.

Walking through the cramped and stuffy apartments was a very moving experience. By being immersed in the space you are really able to get a feel for the hardships endured by the immigrants.

Museums are no longer just buildings designed by famous architects with priceless art on the walls. Traditional museums have evolved and perhaps the definition of the word "museum" needs to be modified. I think the Tenement Museum has redefined the role of museums. It is not just a building with old stuff in it but an educational, historical and cultural experience that was deeply touching. I loved the Lower East Side Tenement Museum and would definitely go back to take another tour.

What makes a museum a museum? 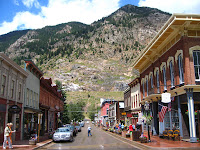 On my trip to Colorado, I went to visit historic Georgetown. It's a quiet lazy little town located 45 miles west of Denver. You can park for free in any of the public parking lots and take a self-guided walking tour of the downtown area. If you stop by the Gateway Visitor Center when you enter into Georgetown you can pick up a map and get directions, drink some free coffee or hot chocolate, and speak to the very friendly staff who can answer all of your questions. 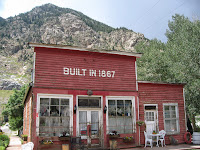 I really enjoyed wandering around the town and checking out all of the unique stores. Buffalo burgers are a specialty in the many restaurants you can choose from as well as homemade ice cream and candy. I never thought an Oreo couldn't get any better but then I found one covered in chocolate! 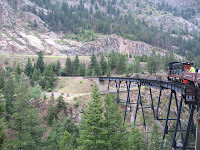 I could have been very content sampling the homemade candies all day but instead, I made the mistake of buying a ticket for the Georgetown Loop Railroad. For an overpriced $22.50 you can purchase a ticket for an hour-long train ride described as:

"a fun adventure that will thrill the entire family. The beauty of the rugged Rocky Mountains surrounds you as an old-time steam locomotive or one of our powerful diesel locomotives winds up the Clear Creek Canyon, hauling your train past the remains of several gold and silver mines".

This might have been true had the heavens not opened up and poured buckets of rain onto our open car. All of the passengers had to either seek shelter in one of the fully-enclosed cars or stay where they were and get drenched. Inside the fully enclosed car, the view was obstructed which didn't really matter because it was raining so hard that you couldn't see anything anyway. Of course the term "fully enclosed" is not entirely accurate because there was no glass in the windows. The sides were open to let all the rain in.

We stopped in Silver Plume just 20 minutes later to pick up more passengers. This is the part of the "hour-long train ride" I wasn't informed about. I found out that the train ride is in reality only 20 minutes up to Silver Plume, a 20 minute stop, and then 20 minutes back on the same route we came.

There was nothing to do in Silver Plume but spend money in their gift shop or go to the museum. I chose the museum which was yet another misleading disappointment. 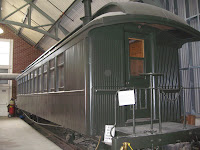 I walked inside a building that was old and dirty and pretty much empty with the exception of two old trains. There really wasn't much to look at anyway since everything was roped off preventing visitors from being able to go inside the trains. I tried very hard to get a peek inside but there was nothing in there anyway. There were no labels or signs to even tell you what it was that you were (or weren't) looking at. There wasn't even any staff to answer questions.

This really was a shame because one of the trains appeared to be a postal train and there was a lot of potential there to create an interesting exhibit. I could think of a ton of fun exhibit ideas for this but in my opinion, if you plunk a dirty old train down in the middle of a room that doesn't make it a museum. I think they could use the revenue from the hundreds of tickets they sell every day to at least install some labels and clean the cobwebs off the trains. 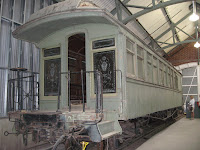 Of course this got me thinking about what it is that really makes a museum a museum. Is it the artifacts, the building, the information, the docents, or some combination of these things that turn a room full of stuff into a museum? I'll be exploring this topic some more in future posts but I'd be interested in hearing what other people think defines a museum. Please feel free to post your comments.