Ellis Island - What to know before you go 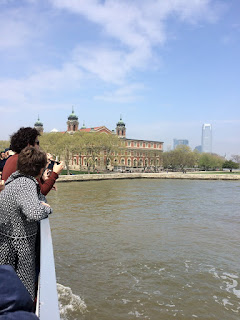 If the Statue of Liberty and Ellis Island are on your "must-see" list when visiting New York City, there are a few things you'll need to know to prepare and get the most out of your trip. Most importantly, this is an all-day activity so don't try to squeeze in other sightseeing adventures. You will spend a lot of your day waiting in line for things and most of these lines will be outdoors so dress appropriately for the weather and for doing a lot of standing/walking. Unless you've purchased your tickets in advance online, when you get to Battery Park you will first wait in a long line to purchase tickets. By the time we got ours, the Statue of Liberty museum and crown tour was already sold out so this post is going to just focus mainly on Ellis Island. Once you've got your tickets in hand, you'll then queue up again to go through the security check-point. If you've got large bags or luggage you won't be allowed on the ferry so plan accordingly. I didn't bring my camera on this trip because I didn't want to deal with the security hassle of carrying around my large camera bag. I apologize if some of the photos in this post are poor quality; they were taken with my cell phone. Be prepared to take off jackets, sweatshirts, sunglasses and remove all wallets and everything else from your pockets. It all goes through an x-ray machine and you will have to go through a metal detector as well. The website claims the security screening is airport level but this was even more thorough in my opinion. I never have to take my watch off when going through airport security and this security screening was far more crowded and chaotic. It did take quite a while because it was a cold day and people had to take off all of their layers and then put them back on again to go back outside and wait on another line for the ferry.

Once on the ferry, you'll either find a seat or you might have to stand if all the seats are taken already. If you're on the upper deck it will obviously be very windy so if you want the view then bring an extra jacket or sweatshirt. The lower level of the ferry does serve food in case you're hungry from standing in line all morning. Otherwise, you can also get food at the Statue of Liberty or Ellis Island. 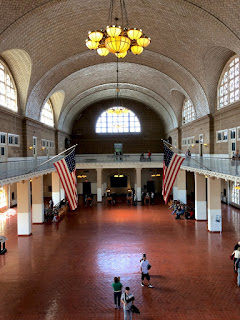 Once you finally get off at Ellis Island you'll probably need to use the restroom. If you're a woman, be prepared to wait another 30 minutes in another line since there are only two toilets in the women's restroom on the main floor. The men's restroom line, as always, moved slightly faster. If you can't wait 30 minutes, I'd recommend taking the elevator up to the 3rd-floor restrooms.

You might be a little tired before you've even started touring the museum. This is why you need to be prepared and pace yourself. This museum is deceivingly large. We started by picking up our headsets for the audio tour. The audio tour is included with your ticket price. We were directed to start the tour upstairs on the 2nd floor. The tour then leads you from one small room to the next. Some of the rooms were crowded and it was difficult to see the exhibits. Much of the audio tour was reiterated in the exhibit text so it was a bit redundant and I found it distracting to try to listen and read exhibit labels at the same time but I did enjoy a lot of the oral histories and personal stories of the passengers which were not part of the exhibit signage. At a certain point, I had to switch off the audio tour because it was taking way too long to listen to the audio and then read all of the signs and there would have been no way I would have been able to see the whole museum in just one day! 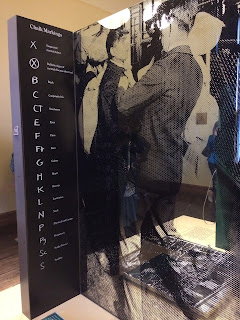 This part of the exhibit (in the picture on the right) was about the chalk markings that immigration officials used to indicate the health status of arriving passengers. They would use chalk to write on passengers' coats. The letter represented various illnesses that might determine if a passenger was sent home or made to stay in the infirmary before being allowed to officially enter the United States.

The picture below was part of a display on the 3rd floor that showed photos and illustrations of many of the ships that sailed from all over the world bringing immigrants to Ellis Island. 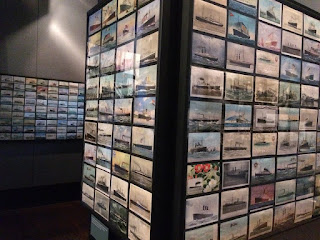 This display (below) was both interesting and amusing to me because my husband is currently applying for his citizenship. These are booklets about "How to become an American citizen" as well as literature about Citizenship classes. Maybe I should send him to Citizenship school! 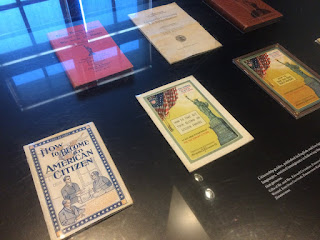 At first, I didn't realize there was a whole 3rd level to go through and was already suffering from museum fatigue but everything was so interesting and I was determined to see it all. I thought we had seen the entire museum, only to realize that the ground floor had a huge exhibit that took up half the space. We didn't notice it because we were directed to start the tour upstairs so make sure you don't miss it either. It's a fairly new exhibit called the Peopling of America Center which opened in 2015. 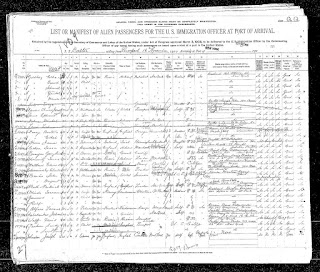 One of the most interesting parts of the experience for me was the opportunity to look up family members in their database at the American Family Immigration History Center. If you have known ancestors who came through Ellis Island between 1892 and 1957, you might be able to find them in the database. I paid $7.00 for 30 minutes of access to a computer. This wasn't a ton of time but the great thing is that you will get an additional 90 days to complete your research using your own computer at home which will give you access to the database. So I didn't quite find what I was looking for when I was at the Immigration History Center but I continued my search when I got home and I think I found my Great Great Grandfather on this ship's manifest! I don't think I'll have any way of knowing for certain if this is really him but based on stories from my grandmother, I think there's a good chance. 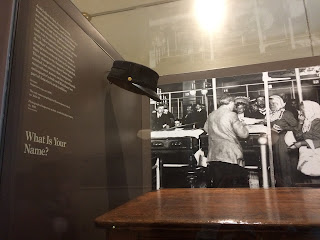 My grandmother's maiden name was Davis. She said her family got that name because her grandfather, David Wolff emigrated to the United States from Russia and when he got to Ellis Island, they couldn't understand his English and inadvertently changed his name to Wolff Davis. This is in line with many of the stories from other passengers. While there were interpreters staffed at Ellis Island, so so many dialects of different languages were spoken that it was sometimes difficult to accurately record people's personal details and mistakes did happen. This one, in particular, left my Great Great Grandad with the first name Wolff for the rest of his life!

He's listed on line 27 of the ship's manifest (above). It says his last place of residence was Naniokst but when I looked it up, I couldn't find any information on a place by that name. If anyone has ever heard of it please let me know. His nationality was Russian and his Port of Departure was Liverpool. He was single and 26 years old when he arrived on November 26, 1904. Under the "Occupation" column, it says he was a Locksmith. It also said he would be staying at 616 West 46th St. with a person named Father James Parker.


If you have time left before getting back on the ferry, make sure to visit the American Immigrant Wall of Honor outside overlooking the NYC skyline. It's a national monument featuring individual and family names celebrating the immigrant experience.

There are so many places to see and things to do when in New York City. It can be difficult to get to all the things on your must-see list but being prepared with some local knowledge and insider tips will definitely help. I hope this post about Ellis Island will help you get the most out of your sightseeing adventures.