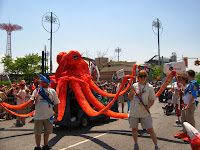 Over the summer I worked for a little bit at the New York Aquarium located in Coney Island. This year was the first time that the NY Aquarium had a float in the Coney Island Mermaid Parade.  I had never been to the parade before but heard it was a lot of fun. When I found out the Aquarium needed puppeteers for their float I happily volunteered and I learned that it's way more fun to march in a parade than to just watch one pass by. The giant octopus float was created by the lovely and talented Katherine McLeod who builds and maintains the exhibits for the NY Aquarium. Many volunteers also helped Katherine build the float and march in the parade. I got to be an octopus tentacle (along with 7 other volunteers) and of course, we also had a mermaid. 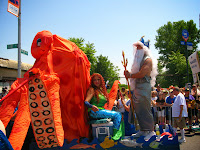 The Octopus float brought new meaning to the words "traveling exhibit" as the Aquarium used the opportunity to get it's conservation message out and we even gave out free passes to the crowd so they could come to see the exhibits after the parade.

Being an octopus tentacle was a lot of fun. I know myself, and all the other tentacles, can't wait to build a bigger and better float next year and march again. 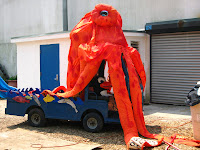 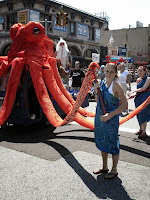