I spent my last week in New Zealand back in Auckland. Last Saturday, my coworker Anthony and I went to Western Springs Park to see the Pasifika Festival, the world's largest Pacific festival which showcases the culture, traditions, and heritage of all of the Pacific Island Communities.

The park was filled with an estimated 200,000 visitors and each section of the park was designated to a Pacific Island. There were booths set up for selling food and wares as well as stages for performances. You could even get a tattoo if you wanted. I know it would have made the blog much more interesting but Sorry, I did not come home with a tattoo. After the festival, we walked over to Eden Park to watch another Rugby match ending a complete day of the New Zealand cultural experience.

On Sunday we decided to visit the zoo because I could not travel all the way to New Zealand and not see a Kiwi. Kiwi's are a native flightless bird and New Zealand's national symbol. They are also endangered. I felt bad for the little endangered Kiwi all alone in his big enclosure. I only saw one Kiwi in there so I hope he had a friend that was maybe sleeping or hiding. He was bigger than I thought he would be. Like a small chicken but cuter and sillier. He was digging through the leaves with his long beak and when he pulled his head out there were leaves stuck to his head. I wanted to take him home with me. 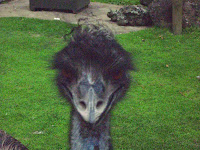 The exhibit design and signage were pretty much non-existent. It would have been nice to see a label here and there indicating what animal it is you're looking at. They had a lot of native birds I had never seen before. I would tell you their names but I don't know because there were no labels.

The highlight of my visit was the hippos. Despite my repeated requests, we did not have any hippos at the Bronx Zoo. I almost didn't get to see them at the Auckland Zoo either because there was a wedding going on right in front of the hippo pond. That's right. Somebody's dream wedding involved saying their vows in front of a hippopotamus. I waited out the wedding procession, managed to inadvertently get myself into some of their photos, and then got to see my hippos. 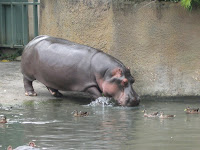 The following Saturday was my last day in New Zealand. We decided to visit Auckland Domain before going to one more rugby game. Within the park is the Auckland War Memorial Museum which we did not get to early enough to visit (sorry! I definitely will go next time) and several botanic gardens called the Wintergardens (which we did get to visit. Yay!). Then there's the park itself which has cricket fields, and fountains and beautiful ponds. Ok New Zealand. We get it already. You are stunningly beautiful. You can stop rubbing it in. It's not fair that all the beauty should be concentrated on your two tiny islands and not spread out evenly throughout the rest of the world.

So here I am now back in New York for less than a week and have already endured snow, a thunder storm, and a hail storm. aaah! Springtime in New York. During my entire five weeks in New Zealand it rained only twice. One of those times was during my white water rafting trip in which I was already wet so no big deal. It's been difficult settling back into life here now that I've had a dose of paradise. New Zealand was definitely a life I could get used to. The driving and the coffee were a bit tricky at first but it's not hard to get used to seeing perfect weather and beautiful scenery every single day. It was easy to settle into the laid back lifestyle, the peace and quiet, the endless beauty surrounding you wherever you went. It didn't really feel like a foreign country to me. In fact, it felt like home. I could imagine what it would have been like to grow up there. A little barefoot Kiwi with wild hair climbing the rocks on the beach. Now New York seems so foreign. At least in New Zealand they speak English.


This is the last New Zealand post I will write. Hopefully not forever but just until I can go back someday. I barely even scratched the surface of NZ. There's still so many more places I want to see and explore. New Zealand, I will miss your fresh air and water. I will miss your magic and your sheep. I will miss the free bottle of milk you give me when I check into a hotel. Who wouldn't love a place so sweet and endearing? It's hard for me to even write an ending to this story so I don't think I'll write, "The End." Instead I will leave it unfinished and write, To be Continued.....
Posted by Kim No comments: