The Aran Islands are a group of islands with a population of just 1,200 people located off the west coast of Ireland. There are 3 islands named Inishmore (Inis Mór), Inishmaan (Inis Meáin), and Inisheer (Inis Oírr).

My husband grew up in Ireland but had never been to the Aran Islands. It was a place that he talked about visiting for a long time. He spoke about it as being authentically Irish because of its culture and because it's part of the Gaeltacht. The Gaeltacht refers to the regions in Ireland where the Irish language is the primary language spoken.

To get to the Aran Islands you have to book a ferry from Doolin or Galway. We watched the weather reports daily and booked our ferry for the only day that week when rain was not expected. We paid a little bit extra for the combo trip which would take us to Inishmore and then around the Cliffs of Moher on the return trip. We couldn't have asked for better weather as we had nothing but rain, wind, and fog all week. There was a beautiful clear view of the Cliffs of Moher from the ferry port. It was a great day for a boat trip. I love boat trips and I was excited.

The brochure showed luxurious looking boats that looked like miniature cruise ships. Most of the tourists going to the Aran Islands via the Doolin Ferry that morning got on those boats. For some reason, a small group of us were told to wait in line for a different boat. The wind picked up and the sea looked very rough. My husband and I started to get very nervous when the boat that showed up to transport us to the Aran Islands looked like an old fishing trawler. He kept saying that our boat did not look like the boat in the brochure but assured me that it would only be a 20-minute trip.

Once we took off, the boat began violently rocking side to side and bobbing up and down. We were sitting inside and it soon got very hot. Within 15-minutes of leaving, a little girl got sick and we were all trapped inside with the heat and the smell and the violent rocking. All 75 passengers began to simultaneously get sick. Everyone ran for the sick bags and the outer deck.
It was a nightmare.

I kept telling myself that it would be over in 20 minutes. Except it wasn't. The trip lasted over an hour. We all crowded onto the bow of the boat for fresh air so by the time we arrived in Inishmore everyone was soaking wet, shivering, and nauseous.

There are a few transportation options for exploring the island. You can rent a bike which at that particular time was out of the question since we were still feeling very ill. You can also take a horse and buggy tour but sitting at the back-end of a horse was also not appealing after what we had just endured. There were also a few vans driving around that offered rides for a fare.

Before we decided on moving again, we found a café where we could sit, drink tea, and warm up on the solid ground. The family with the little girl that started the vomit-palooza on the boat were seated next to us at the café. They were all still feeling sick except, of course, for the little girl who was now in a happy mood. 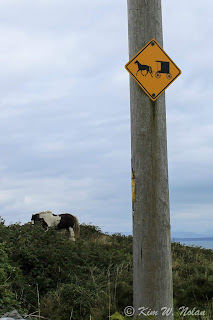 Before we could decide on what to do for the rest of the day, my husband had to call the office at the ferry port. While on the boat he realized that he forgot to buy a parking ticket for the car and that we'd return to Doolin to most likely find our rental car had been towed. The woman in the office spoke to the Harbor Master who located our car and paid for a parking ticket for us. We couldn't believe how nice they were. The day was starting to look better.

Most of the passengers from the fancy-looking cruise ships seemed to be completely fine and immediately took off on their rented bikes. We took our time recuperating and walked around visiting the local shops. Inishmore is the largest of the three islands but being that the island is only 12 square miles and home to about 800 people, there is only a need for a few shops. One of them includes Aran Sweater Market, home of the world-famous Aran sweater. There is also only one grocery store on Inishmore. We went there in search of Dramamine or any kind of seasickness medication only to discover that there is nowhere on the island that sells it. The only things we could find to help with nausea were ginger beer and some candied ginger. We had only arrived and I was already dreading the trip home. 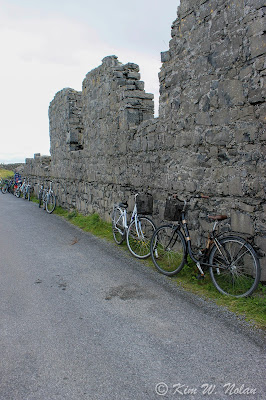 When we finally started to feel a little better we decided to rent bikes and ride around the island. The island is very hilly but the bikes were hybrids and very easy to ride. 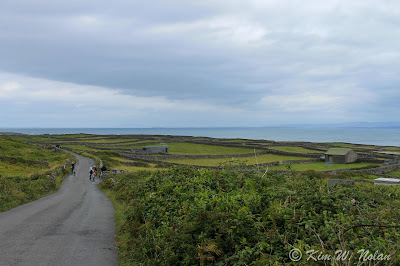 We rode up and down rolling green hills. 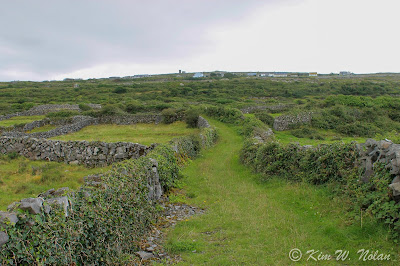 We saw many stone walls, 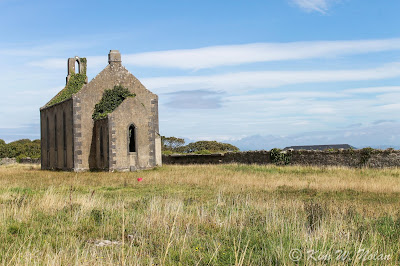 the remains of old churches and houses, 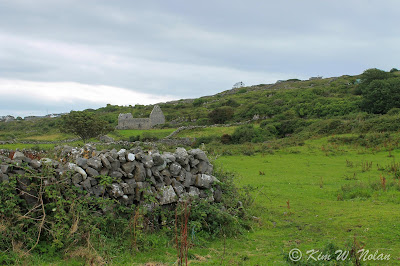 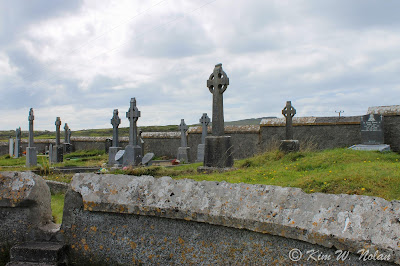 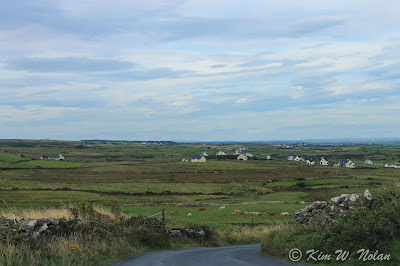 We were surrounded by views of wild landscapes 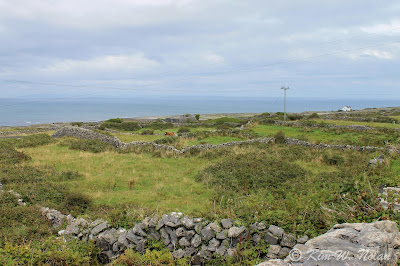 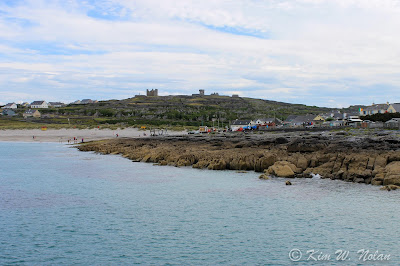 The island also had beaches 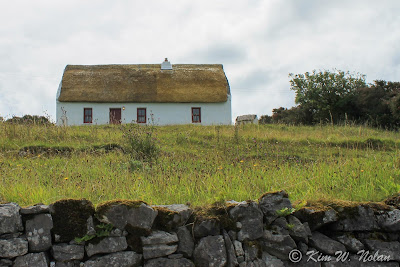 and many thatched cottages. 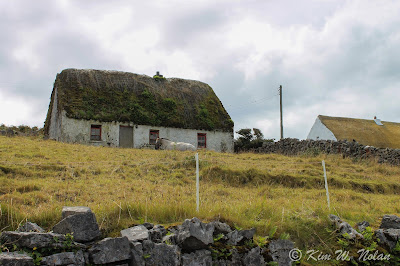 It's no wonder Inishmore is famous for its Irish culture. 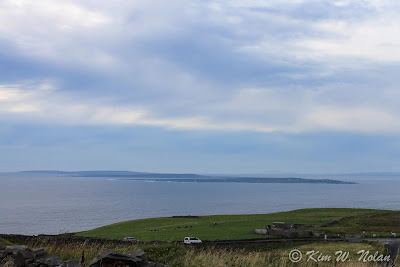 From this vantage point, we could see the other islands. 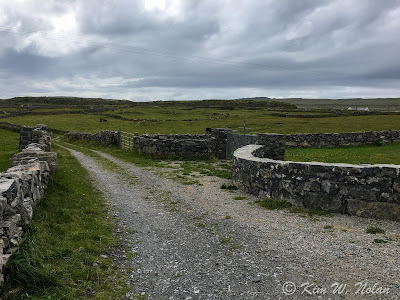 When we finally made it to the other side of the island, we found out why the other passengers rushed off their boats to rent bikes. If we wanted to climb up to Dún Aonghasa, we wouldn't make it back in time to catch the ferry back to Doolin. Dún Aonghasa is a prehistoric fort that archaeologists believe was built sometime around 1100 BC. The 14-acre site sits on a 300-foot cliff which has spectacular views, or so I'm told. The climb up to the fort was packed with people. It would've taken at least an hour to climb up, tour the site, and climb back down. We were so disappointed when we realized we had only one hour left to cycle back to the ferry.

If you want to take a trip to the Aran Islands, my advice would be to spend a little extra money on the combo trip to see the Cliffs of Moher on the return trip to Doolin. The downside of this is that you have to go on the little fishing trawler packed with seasick passengers. However, if you take medication for seasickness beforehand and start cycling to the other side of the island as soon as you get off the boat then you should have plenty of time to make it up to Dún Aonghasa.

We were put back on the dreaded fishing trawler for the trip home but we made a short stop at one of the other islands to switch to the more luxurious boat before heading to the cliffs.

We had a much smoother and more comfortable ride on the new boat and not one person got sick! We had visited the Cliffs of Moher the day before (read my post: Cliffs of Moher) and while the views are sensational from both vantage points, we were able to see far more of the cliffs from the perspective of the ocean. I don't know if it was worth turning green on a boat for the first time in my life or having to miss experiencing Dún Aonghasa but if you take my advice and plan accordingly then the combo trip will definitely be worth the extra money.


Posted by Kim No comments: