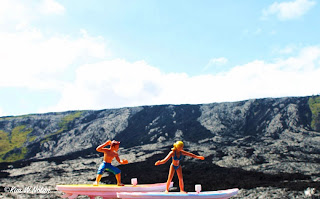 Last week we took an overnight trip to the Island of Hawaii (a.k.a the Big Island) for my birthday. This was my first visit to the Big Island so I was pleasantly surprised to find that it was very different from our home on Maui. 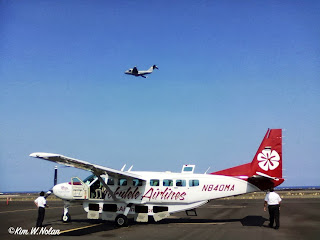 First, we flew on the tiniest plane I have ever been on. This little prop plane (pictured above) seats just 9 or 10 passengers. We all had to get on a scale while holding our bags and were seated according to weight to properly balance the plane. This was the most terrifying and exhilarating flight of my life. My birthday was off to a pretty good start. 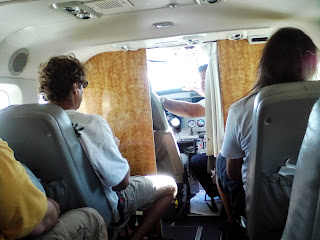 Thirty minutes later, we landed in Kona and then drove approximately three hours to Hawaii Volcanoes National Park. I didn't mind the long drive as it gave us the opportunity to see much of this fascinating island. Driving through the ever-changing landscape of desolate fields of lava rock and lush rain forests, the climate would change from blaring sun and stifling heat to cold and rainy every ten minutes.

Six volcanoes fused together by lava flows have formed this island over millions of years and it is still growing. The summit of Mauna Loa stands 56,000 feet above the depressed ocean floor making it over 27,000 feet taller than Mount Everest. Mauna Loa and Kilauea are two of the world's most active volcanoes and the constant flowing lava continues to change the shape and size of the island.

In the middle of the rainforest lies the 500-year-old Thurston lava tube. One minute we were walking through dense flora listening to the symphony of jungle creatures and the next we were in a dark and slimy cave-like channel. Without the lights mounted along the walls, we would have been in total darkness. I was able to take this photo (above) using a very long exposure and then brightened it up in Photoshop but even with the lights, it was difficult to see far ahead. 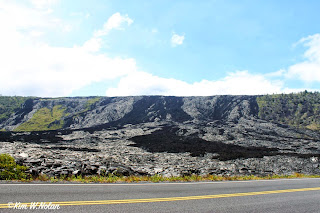 Here is a photo I took of the lava flow along Chain of Craters Road. The darker layer of lava is the more recent lava flow. 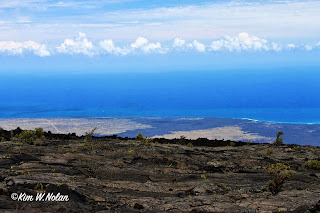 In this photo, you can see the path of the lava flow from above. When it reaches the ocean it cools and forms new land.
This is a 60 foot (18 m) tall sea arch formed by wave erosion. 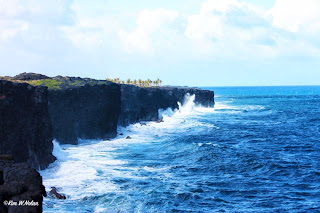 The rugged coastline formed by molten lava and the harsh ocean waves. 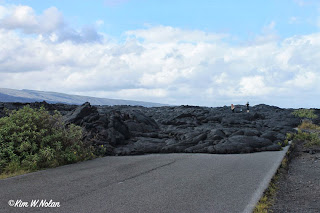 A 2003 lava flow closed Chain of Craters Road for good.
While walking on the lava fields you can feel the heat rising up from underneath the surface. It is a type of heat I have never experienced before. It feels like your feet are being cooked and the heat travels up through your body. As you can probably deduce from looking at these photos of the terrain, you'll want to wear sturdy and comfortable footwear.

Sulfur Crystal and other minerals deposited by volcanic gases paint the rocks in shimmering colors.

The climate in the park can change drastically from 90º and blinding sun in the lava fields to 60º and rain at the higher elevations along Crater Rim Drive. Be prepared for all types of weather.


The sulfur dioxide fumes are known here in Hawaii as VOG. It's a word created to represent the combination of volcanic ash, fog, and smog created by the erupting volcanoes. The effects of vog can be felt by us on Maui and even as far away as Oahu. If you already have breathing difficulties, be advised to bring your medication as vog can exacerbate your symptoms. Even in healthy individuals, vog can cause headaches, dizziness, and flu-like symptoms. 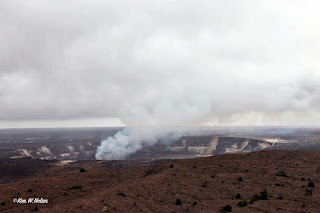 This is a view of the Halema'uma'u crater from the overlook on Crater Rim Drive.


The Thomas A. Jaggar Museum is open daily from 8:30am to 6:00 pm (Hours vary with seasons and volcanic activity)

At the entrance to the park there is also the Kilauea Visitor Center (open daily from 7:45 am to 5:00 pm), which is staffed with Park Rangers who can provide you with maps and answer questions. There are also Park Rangers throughout the park giving tours or you can do a self-guided tour and and get information using the Automated Cell Phone tour. 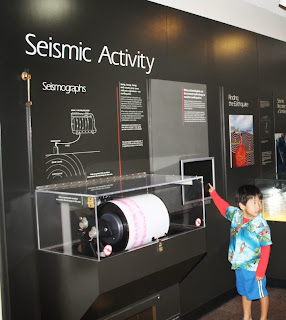 A little lesson on Seismic Activity at the Jaggar Museum. Jump up and down and to see how much seismic activity you can create. 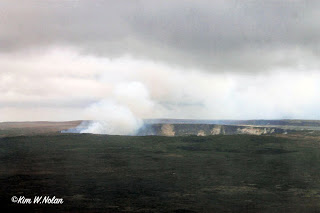 Hawaii Volcanoes National Park is a United States National Park and is listed as an International Biosphere Reserve and a World Heritage Site.
http://www.nps.gov/havo/index.htm

I'm working on a new post about my recent trip to Volcanoes National Park. In the meantime, please enjoy this preview video of Kilauea in action!