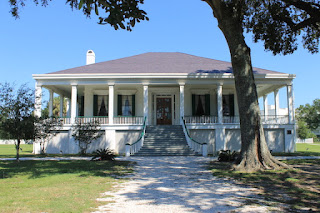 The problem with an unplanned road trip is that sometimes you stumble upon places that you wish you hadn't. We were really taken by all of the old plantation style homes in Mississippi and wanted to take a tour of one. The woman working at the Mississippi welcome center told us to go to Beauvoir and we had no idea what we were walking into.

I've been debating whether or not to write this post for a long time because I don't want to give promotion to a place that made me feel so uneasy. I guess my naive expectation was that I'd be touring the site in a historical context that would condemn rather than glorify the Confederacy. A very brief history of Beauvoir is that it was the former home of Jefferson Davis, the President of the Confederacy and now it's a National Historic Landmark and Museum. Davis's wife sold the plantation to the Mississippi division of The Sons of Confederate Veterans with the stipulation that it be used as a Confederate state veteran's home and later a memorial to her husband. 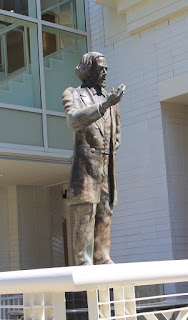 Growing up in New York, when we were learning about the Civil War and slavery in Social Studies class, I remember my teacher told us that the part about slavery was omitted from textbooks in the south. I was in disbelief over this revelation. Now that I live in the south, I see history is written more like fiction than fact here.

The tour of the home was led by a sweet old volunteer that turned out to be a proud member of the Sons of Confederate Veterans. I had a very hard time reconciling my feelings about this racist grandpa. As a Northerner who dedicated many years volunteering for the African American Museum, I hadn't been this uncomfortable since we took a tour of the Cu Chi Tunnels in Vietnam, where our guide told us that his mother died saving him from napalm and he had the scars all over his body to prove it. Needless to say, he was not a big fan of Americans. However, this part of the Beauvoir tour was really just about the house. Very little was mentioned about the war and Jefferson Davis himself. There was a video playing in the library glossing over the history which we went to watch after the house tour was over. 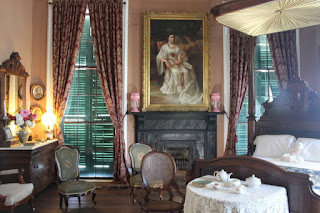 Personal feelings aside and viewing the house strictly from a museum standpoint, it was very disappointing. We got to see two rooms in the whole house. The rest were closed off or piled with furniture and there was nothing really architecturally impressive about it either. Much of the original home was destroyed during Hurricane Katrina and for some reason, they were granted funding and given donations to help rebuild. More than 200 people in Mississippi died during Katrina and 90% of the structures within half a mile of the coastline were destroyed. With all the people who were left homeless, I don't understand why money was granted to restore an empty home commemorating our country's shameful past. We decided right then that there were far too many war museums in this world and that we had been to one too many. We had both reached our limit in Mississippi. 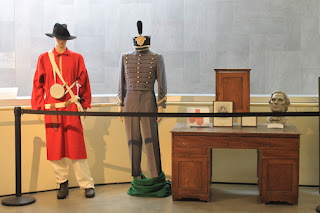 The site was originally 608 acres but is now 52 and consists of the residence, a botanical garden, a former Confederate veterans home, Confederate Soldier Museum, the Jefferson Davis Presidential Library and Museum, a gift shop, various outbuildings, and a historic Confederate cemetery, which includes the Tomb of the Unknown Confederate Soldier. Five of seven of these buildings were destroyed by Katrina and replicas are being planned. 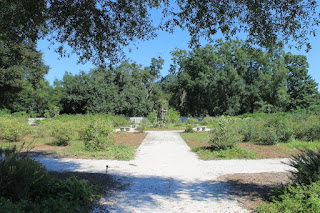 I will admit that the grounds were very pretty, especially the little botanical garden which had hundreds of butterflies everywhere. 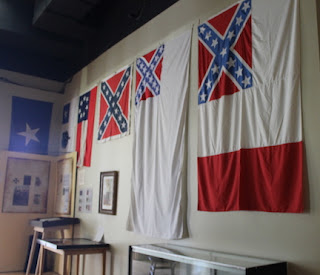 Oddly, the gift shop was probably the most disturbing part of the entire visit. It was full of confederate flags and stickers for sale which did make me feel sick but it was the screeching parrot that actually had us running for the door. Yes, someone keeps their angry pet parrot in a cage in the gift shop and even he hates the place. On the plus side, he did a great job of keeping customers from spending money in the store. We ran out of there, went directly to our car and drove right out of Mississippi.
≈≈≈

**I just want to add that overall we had a really nice time in Mississippi and there are a lot of wonderful places to visit. Downtown Ocean Springs is a great place to stroll around. It's filled with charming shops and art galleries and great restaurants. In fact, I had the best seafood of my life at a restaurant called Phoenicia Gourmet. The lesson learned here is that next time I'll do a little research into where I decide to spend my time and money. Instead of spending your time and money at Beauvoir, I'd recommend visiting The Pleasant Reed House or donating to the Southern Poverty Law Center.