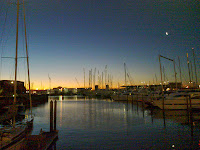 While in New Zealand for almost a month now I've been undergoing a slow transformation from New Yorker to Kiwi. I've learned the metric system, I use Celsius instead of Fahrenheit and I drive on the left side of the road. I am shedding my dull gray American skin (literally because my skin got so sunburned it's peeling off in sheets) and coming out of my chrysalis (with lovely tanned brown skin) a bright and shiny Kiwi.

It's week 4 and the transformation is finally complete. Last weekend I had the 100% hardcore Kiwi experience. I spread my new Kiwi wings and set out on a 3 hour trip to the town of Turangi for a white water rafting trip with some co-workers. First I stopped off in Taupo to meet one of them and watch the New Zealand Iron Man Competition. The competitors not only had to endure a grueling Triathlon but it was also pouring down rain the entire day. The town was packed with people from all over the world coming to see the event. Despite the rain, it was still very exciting. New Zealand seems to be the perfect place for an all-day competition that pushes the limits of human strength and endurance.

After that, we drove another hour to Turangi for White Water Rafting down the Tongariro River. Because of all the rain, the water was 30 meters high (note use of metric units instead of imperial units) instead of the usual 16 meters high (although a native Kiwi would spell it "meters" rather than "meters") and therefore twice as fast as normal. My Kiwi initiation day. The rain did not let up for the entire two hours of the rafting trip but it didn't really matter since we were soaking wet anyway. I was a little scared at first but once we got through the first set of rapids I was all right and loving it. It was non-stop excitement.


On the way home, we stopped back in Taupo again for dinner and the racers were still at it in the dark and pouring rain. There were a few miserable stragglers still trudging along to the finish line. As I was driving past them in my warm comfortable car I wished I could pick them up and give them a ride to the finish line but thought that would probably be a bad idea. Anyway, I had a three-hour drive back to Tauranga and had to get back on the road.

The country roads were pitch black and the rain was pouring down so hard I could barely see two meters in front of me (note my use of metric system again). And of course, they were the typical sharp and steep treacherous New Zealand roads I referred to in my last blog about driving through the Coromandel Peninsula. For the next three hours, I had the most terrifying driving experience of my life. My fingernail prints are permanently embedded in the steering wheel. The drive home made the white water rafting seem like a lazy rowboat ride down a quiet river. I call this passing the Kiwi drivers test.

Sunday morning one of my coworkers drove up to keep me company in Mount Maunganui. Since I'd spent the past couple weeks there all by myself it was nice to have someone to do things with and not have to sit in a cafe drinking my flat white talking to myself. It was mandatory that I show him the main attraction and take him up to the top of Mount Maunganui. So we started with a warm-up on Moturiki Island and then hiked past the Kiwis with their broken limbs to the summit of the Mauao. Then we did the base track and I showed him where the remains of a shipwreck from 1950 were located. After that, we got some lunch and rented some surfboards to wind down the day with a fun surf session in the Blowhole.

Monday I left Mount Maunganui to go stay the night in Waihi. On the way, I had to work in Te Aroha and Paeroa. Te Aroha is another tiny town that you can walk through in under a minute. Paeroa's claim to fame is its really popular beverage, "L&P" which stands for Lemon and Paeroa. It's a delicious and refreshing drink, like lemonade with a kick, and can only be found in New Zealand. Paeroa is so proud of its beverage that they even have a statue of an L&P bottle at the entrance to the town. At the L&P cafe you can get all kinds of L&P souvenirs and even L&P ice cream.


While in town, I visited the L&P cafe (of course) as well as the Paeroa & District Museum. It had photographs and collections of artifacts relating to Paeroa's history in addition to a very diverse assortment of collections ranging from seashells to this old beauty salon hair waving machine. It looks like some sort of torture device but this is what women used to make their hair wavy before the invention of the perm.
﻿
﻿

They've got exhibits relating to military, sports, fashion, crockery, and school to name a few but my favorite collection was the Maori artifacts because it's something I've never seen at any other museum I've visited and they are truly beautiful and intricate works of art that have deep meaning. With almost 800 objects on display, they have one of the largest collections of Maori artifacts in NZ and possibly the world.

On my way to Waihi, I stopped off to hike Karangahake Gorge. It's the site of the original gold rush in 1875 and still has the remains of an old gold mining company and mine shafts all along its trails. The views were beautiful but the bridges were a little scary!! You have to walk across while they bounce and sway over the Ohinemuri River but it's worth the small heart attack.

﻿﻿﻿
﻿After that, I drove to Waihi and checked out the gold mining quarry. At around 6 pm Waihi became a ghost town and I had to eat dinner at Subway because it was the only place still open.

The next morning I drove back to Auckland where restaurants, shops, and bars never seem to close (especially O'Hagans which is right outside my bedroom window and plays music until 4am every day) and just in time to miss the Tsunami which reached the Bay of Plenty a few days after my departure. Thankfully, it was only a small Tsunami and my beloved Mount Maunganui was unharmed. I was scheduled to fly home yesterday but it looks like I'll be staying here for a bonus week. Now that I've had a chance to test out my new Kiwi wings I should be ready to fly home.