We left New York on Friday, October 21st. We had a layover in Kiev, Ukraine and our connecting flight to Turkey was delayed for over an hour. After spending four hours in Kiev airport with only one bathroom for hundreds of angry people we have no desire to ever visit Ukraine again.

Our second flight landed in Turkey around 5pm on Saturday the 22nd. A little over an hour late. We got our visas on arrival and then went through customs. The first challenge was to find the bus we needed to take to Taksim Square with the added obstacles of having very little sleep, not knowing a word of Turkish, and while carrying 20-pound bags on our backs. We found an information kiosk and Darren asked (in his politest Irish accent), "Where do we get the bus to Taksim Square?" The girl replied back in English, "I can't understand what you're saying." So I repeated the same question to her again (in "American English") and she understood! She directed us to the bus stop and we were on our way. It was an hour ride but the bus was a very comfortable coach bus and we got to see a lot on the way. We were dropped off with our giant backpacks in the middle of Taksim Square on a Saturday night and it was like Times Square on New Year's Eve. We found our hostel pretty easily especially considering the directions told us to go right when we were supposed to turn left. After we dropped our bags we went out for our first Turkish meal and then we bought roasted chestnuts from a street vendor. There are chestnut carts everywhere and also corn on the cob and carts selling Turkish bagels.

Sunday, October 23rd, we woke up so late we didn't get out for breakfast until 11:30. We had our first Turkish coffees. They're dark and rich and served in tiny little cups so you have to sip it really slow and savor it. I really like the little cups and think it makes it like a special ritual. Darren didn't like it at first but it's grown on him. We didn't do so well with finding breakfast on our first day in Istanbul. I wound up with chicken and Darren had Turkish ravioli!

In Taksim Square, there were protests going on. People were marching with Turkish flags and the military was out with machine guns and riot gear. We chose to steer clear of the riots and found the train to the Spice Bazaar.

The Spice Bazaar was amazing and everything you would expect a real Turkish bazaar to be. It went on and on and up and down all the streets. We wandered around for hours. You can buy everything from spices to fruit to cell phone batteries and even Viagra! The vendors like to ask where you are from and their prices change according to the country you're from. Americans get the most expensive prices so Darren says he's Irish and then I just stay quiet and they think I'm Irish too. They are much nicer to us when we are Irish rather than American. Although I've been asked five times if I come from Spain???

After the bazaar, we walked around the Suleymaniye and Fatih Mosques. If you're a female traveler visiting Turkey I'd recommend bringing your own headscarf. You need to wear one to enter the mosques. You can buy one at any of the markets for 5 Turkish Lira (5 TL). They will also let you borrow one at the entrance to the mosques but it has also been worn by a thousand other heads.

Next, we took a boat ride on the Golden Horn River. It was really fun and gave us a different perspective on Istanbul. The sun was setting and the city was bathed in all different colors.

Darren learned his first lesson about Turkish culture when a man on the boat handed him a sandwich. If someone in Turkey gives you something, they want something from you. So if a man puts a sandwich in your hand then you just bought yourself a sandwich. Somehow we wound up with three sandwiches and two cups of fresh-squeezed orange juice that we didn't even ask for but I have to admit the juice was really good.

After the boat ride we got some coffee and then took the metro back to Fundikli. You have to pay 2 TL for each transfer so we realized we could save 8 TL a day by getting off at Fundikli and walking one stop to Taksim Square. The only problem is that on the way home you have to walk up a really really steep hill but we figured it's preparing us for our trek in Nepal in a few weeks.

We wandered around Taksim Square for a while and tried some Turkish Delight which was fantastic. Turkey has some of the best desserts in the world. Later at the hostel, we found our Lebanese and French roommates had moved on and we now had new French, German and South African roommates. Alex is from Cape Town and was really excited to hear that Cape Town is our next stop after Istanbul. She was so thrilled that she planned our whole itinerary for us (See my next blog on South Africa). She showed us where to go and where we should definitely NOT go. Complete with what we should eat and where the best surfing beaches are. We were happy she wound up being our roommate because we hadn't planned out what we were going to do in South Africa yet so now that's taken care of.

Once we finally checked our email for the first time, we found out there had been an earthquake in Turkey. We weren't anywhere near the quake but some friends and family were worried until they had heard back from us. There was an earthquake when I was in New Zealand. Then when I was home in New York over the summer and now on my first day in Turkey. I have now been named "Earthquake Kim" (Thanks Alison!) but I swear I had nothing to do with it and am grateful to be unharmed.

Monday, October 24th, we took the metro to Sultanahmet to see the Hagia Sophia (the museum was closed so we had to go back the next day), the Blue Mosque and Topkapi Palace. Inside the Blue Mosque, it is very ornate and impressive. You don't have to pay to go inside (they do ask for a donation) but you must take off your shoes. Don't worry, the carpet is amazingly soft! 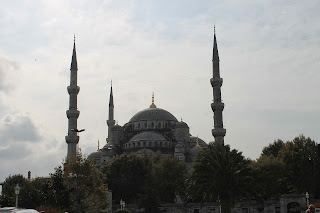 A young Turkish man approached us on the street. He was very friendly and said he was not a tour guide but that he wanted to practice his English. He told us some interesting facts about Turkey, ie. it has over 2,000 mosques. He also told us that if a Turkish man offers you tea and you accept, you will be friends for 40 years. So he asked us to have tea with him and we (reluctantly) agreed. Then he led us to his "Uncles" carpet store, gave us tea, and left us with his "Uncle" who chatted with us about Turkey for a little while and then tried to sell us a $600 carpet. Even after we told him that we don't have a home to put a carpet in, he still persisted. We did, however, enjoy our Turkish tea which is served in these special little glass cups. We had just said that morning that we wanted to try some Turkish tea but need to be more careful about what we wish for! 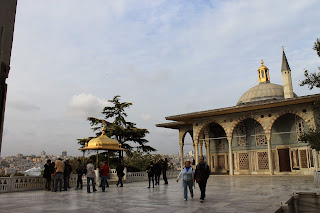 After being lured into the carpet store we finally went to The Blue Mosque and then to Topkapi Palace. We paid 20 TL each to enter the palace. It is now a museum but was originally the primary residence of Ottoman Sultans and is the oldest surviving palace in the world. It was constructed between 1460 and 1478 and built on the site of the acropolis of the ancient city of Byzantion located on the Seraglio Point, at the end of the historic peninsula of Istanbul between the Sea of Marmara, the Bosphorus, and the Golden Horn. The museum has a collection of 80,000 articles including thrones, swords, jewelry, and sacred relics of the Apostles. The exhibits dated back to biblical times. One display even had the staff of Moses. The rooms of the palace were an artwork in themselves. The most interesting of them all was the Circumcision Room. This room was solely dedicated to circumcising princes.

Tuesday we took the train back to Sultanahmet to see the Basilica Cistern and the Hagia Sophia Museum. The Basilica Cistern is one of several underground cisterns commissioned by Byzantine emperors to meet the population's water requirements in case of a siege. It was constructed in the 6th century AD and still holds water to this day.

The Hagia Sophia is stunningly beautiful and architecturally impressive. There are so many little details like the mosaics that were restored after they had been plastered over from when it was turned into a mosque. It was originally a church built by Emperor Constantius in 360. The current Hagia Sophia is the third construction that was built between 532 and 537. After the conquest of Istanbul in 1453 by Fatih Sultan Mehmed II the Conqueror, Hagia Sophia was converted into a mosque.

Our last stop was the Grand Bazaar where there were rows upon rows of hookahs, spices, lamps, rugs and everything else you could possibly want or need for sale. The bazaar seemed like an endless maze where everyone is trying to haggle with you and make you a deal. It was so confusing that we got lost and couldn't find our way out. I'm convinced it is purposely designed this way. 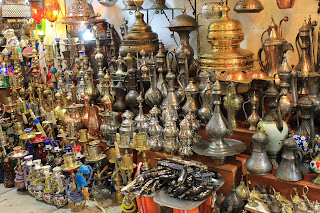 I hope you enjoyed our trip to Turkey. Our next stop is South Africa!