We left South Africa on November 9th. We drove five hours to Johannesburg airport and then flew from there to Abu Dhabi. We flew on Etihad Airlines and it was the nicest airline either of us had ever been on. The seats were really comfortable and even in coach they almost fully recline.

They had the most delicious airline food we'd ever tasted and they even gave us real silverware. There were over 85 movies to choose from on our personal television screen plus TV shows, music, and games to play. You could also watch the plane flying in real-time from the perspective of the cockpit. We got to watch the plane taxi down the runway and take off! You can also choose to watch an above-ground view and see the plane flying over the mountains below.

We arrived in Abu Dhabi around mid-night and our next flight wasn't leaving until 2pm so we had 14 hours to spare. We went to the airport hotel so we could sleep but they were already full. An airport official told us it would be easy to find a hotel close by so we went through customs, got our visas, and entered Abu Dhabi.

Abu Dhabi is pristine. All of the men are dressed in traditional white Kandura's and Ghutrah's (robe and headscarves are also known as dishdasha or keffiyeh). The longer the robe, the more wealth a man possesses. We watched the cars driving up to the terminal. Mercedes, Mercedes, Mercedes. 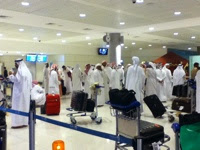 They are all about luxury here. We wished we had more time to see more but what we found out was that since they were currently hosting the Grand Prix, all of the hotels in the area were fully booked (or at least the hotels we could afford!). We had no choice but to go back into the airport and sleep there for the night.

That was basically our entire crazy adventure in Abu Dhabi. We didn't get to see or do much but I did get to ride a camel! 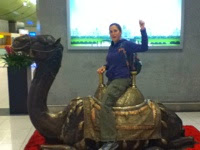