Last weekend was the annual holiday open house at the Gilbert's Bar House of Refuge Museum. This event took place on December 8th. Admission and tours were free between the hours of 1-3pm. 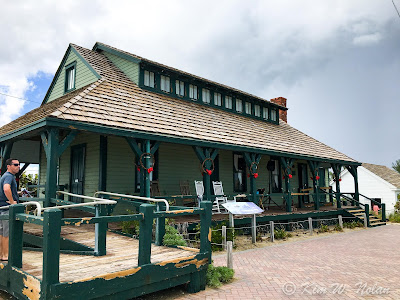 The museum was festively decorated for the holiday and a pianist was playing holiday music on the porch. They also offered free refreshments which included cookies and warm cider. We had a really nice afternoon touring the museum and meeting the wonderful volunteers that work there. 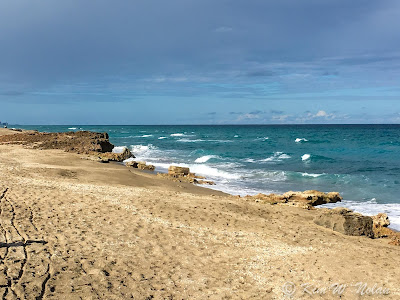 Gilbert's bar is a shoal of Anastasia rock, which is a formation of shell and limestone compressed by the sea over thousands of years. The shoal runs along the coastline and has caused many wrecks for unsuspecting sailors. 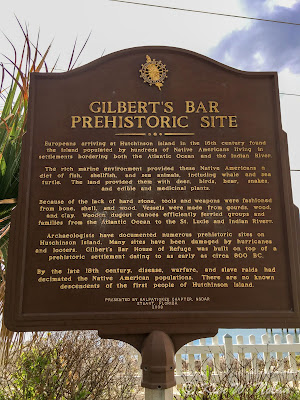 Gilbert's Bar is named after the legendary pirate Don Pedro Gilbert. The son of a Spanish nobleman, Gilbert reportedly sailed his ship in the Hutchinson Island vicinity during the 1820s and 30s. He and his crew would start a fire to deceive ships passing in the night forcing them to run aground on the rocky shoal. They would then kill the men, steal their cargo, and burn the ship. 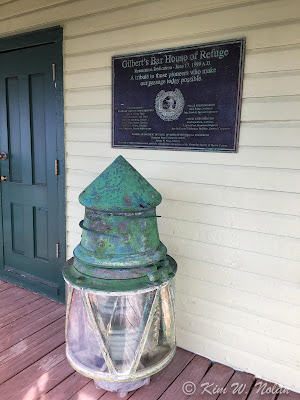 In 1874, The United States Congress authorized the construction of five houses of refuge. They were placed at 26-mile intervals along on the unpopulated east coast of Florida where shipwrecks often occurred close to shore. Shipwreck victims were usually able to reach the beach safely but would eventually perish without food, shelter, or water.

Houses of refuge were part of the United States Life-Saving Service (USLSS) and were manned by a Keeper and his family. Keepers were required to walk the beach following storms in search of shipwreck survivors.

By 1885, there were ten houses of refuge with room and supplies to accommodate 20 shipwreck victims for two weeks.

Gilbert's Bar House of Refuge, completed on March 10th, 1876, is the only house of refuge remaining of the original ten houses. It is the oldest structure in Martin County and is listed on the National Register of Historic Places. 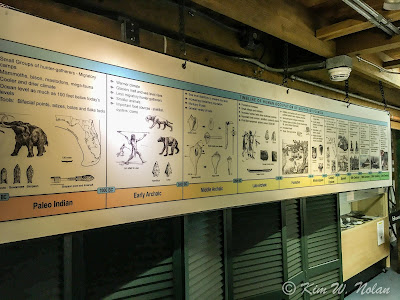 The museum tour begins in the basement with a timeline of the human occupation of Southeast Florida. 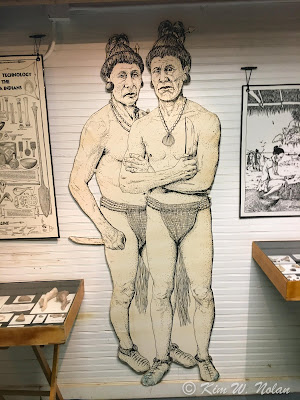 The Ais or Ays were a Native American tribe of Florida. They inhabited coastal regions of eastern Florida from Cape Canaveral to the Indian River. 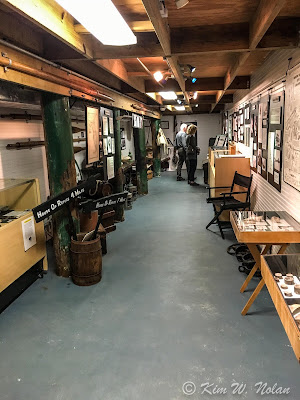 The basement has an exhibit that includes several small displays of Ais Indian artifacts and historical lifesaving equipment. 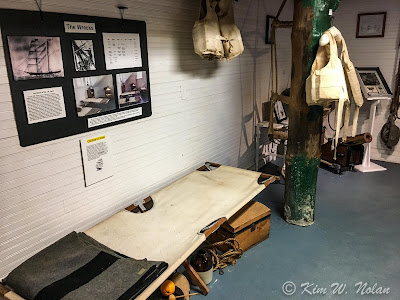 Shown in the picture above, are life vests, blankets, and one of the cots that were supplied to shipwreck survivors. 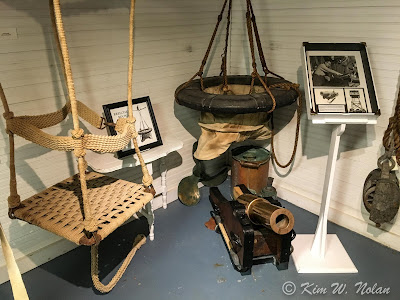 The Breeches Buoy was a piece of life-saving equipment used by the House of Refuge prior to the invention of the helicopter. It consisted of a cork ring-used to keep the person afloat-with canvas breeches attached to it. It hung from a pulley that could be pulled back and forth by hauling lines. A line was fired from the shore to the distressed ship and attached to a high point on the vessel. One by one, the crew and passengers were pulled safely to shore. 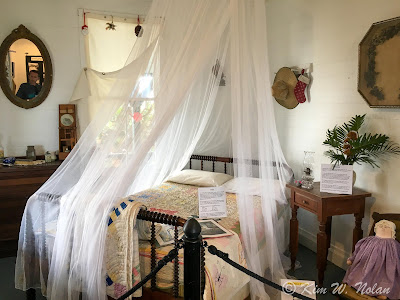 The floor plans of all the Houses of Refuge were identical. This was the Keeper's bedroom (shown in the picture above). On the east and west sides of the house, all the doors and windows line up with each other to take advantage of the cross breeze. This was not only to keep the house cool but to keep the bugs out as well. The windows on the west side of the house have a view of the Indian River and the windows on the east side of the house are facing the ocean. If I had the misfortune of being shipwrecked, I wouldn't mind winding up at this House of Refuge. 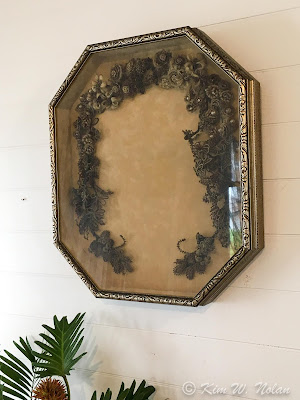 This artwork, known as hair art, was a popular art form in the Victorian Era. It is woven out of human hair. 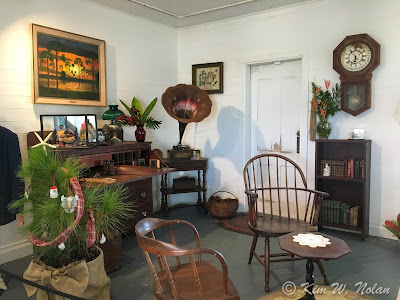 The parlor was used for entertaining. The Keepers were provided with trunks that contained books for entertainment. A few of them also had a Victrola or Edison, an early version of the record player. They often owned music boxes. 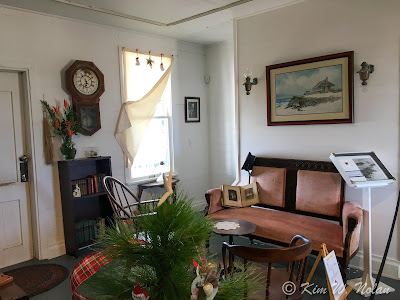 The brass lanterns above the settee were recovered from the Cosme Colzada which came ashore during a storm October 17, 1904. The surviving crew was housed at the House of Refuge.

The paintings were donated by local pioneer, Curt Whiticar, in 2016 when he was 105 years old. 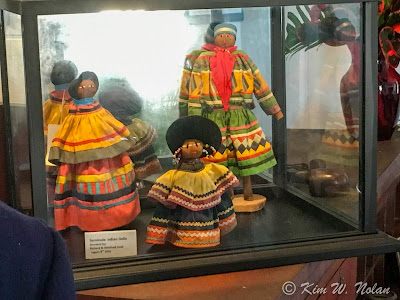 This is a display of beautiful Seminole Indian Dolls. 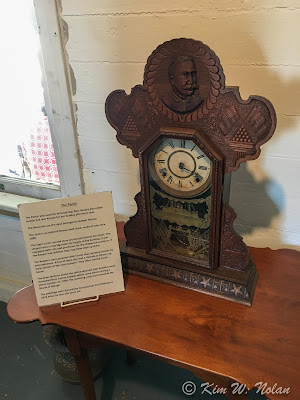 This clock is an Admiral Dewey shelf clock, made of oak, circa 1889. 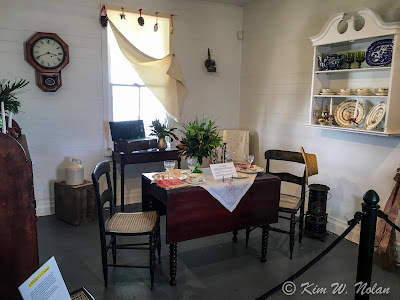 The dining room (shown above) displays china and a lace tablecloth that belonged to Mrs. Bessey, a Keeper's wife. The glass pitcher belonged to the Craigs, a pioneer family in Stuart. The portable oil heater is the only heat source in the house other than the fireplace in the kitchen. 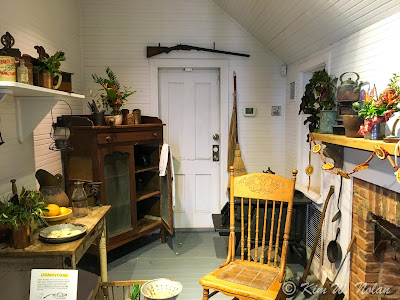 The shotgun hanging over the door in the kitchen was always loaded and ready as bears were a real threat. During turtle nesting season bears swam to the island to raid the turtle nest and eat the hatchlings. 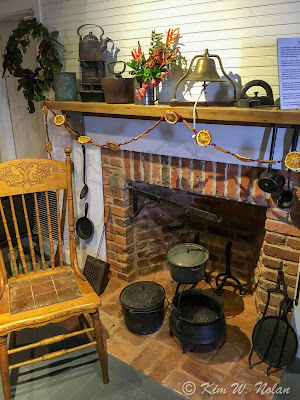 The fireplaces on all the Houses of Refuge were not very functional. The smoke came back down the chimney into the house. Due to this and also the heat it would have created in the house, a lot of the cooking was probably done outside. In later years the Keepers had stoves.

Ironing was done with cast irons which were heated in the fire. The ironing board is on exhibit in the basement as it is an artifact from the Georges Valentine. It never had legs but was balanced between two flat back chairs.

Museum visitors were not permitted on the second story but according to the sign, the second story is one big room the length of the building. It was equipped with cots and provisions for the shipwreck survivors. If the Keeper had any children they may have slept up there.

The Keeper was paid a salary and had to provide for himself and his family. The closest place to buy supplies was Titusville. He had to travel by small sailboat up the Indian River lagoon and it could take up to two weeks. The longest supply run recorded was two months when one keeper was stranded in Titusville by two hurricanes. 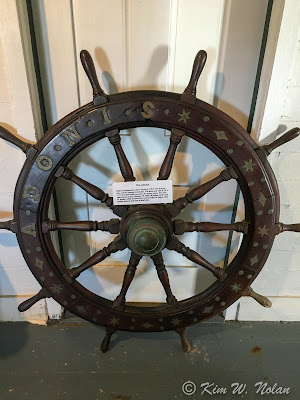 This ship's wheel is from The Adonis. It was built in Bridgetown, Nova Scotia in 1903. She was abandoned at sea on October 19, 1920, 20 miles northeast of Jupiter while bound from Jacksonville to Sagua. She drifted ashore and was a total loss. 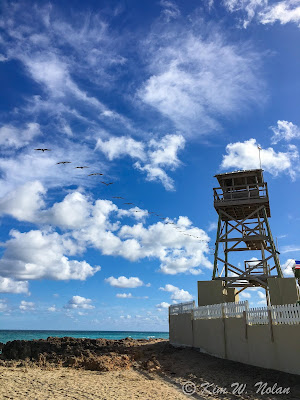 In 1915 the U.S. Coast Guard was formed when the U.S. Life Saving Service merged with the U.S. Revenue Cutter Service. The House of Refuge became the U.S. Coast Guard Station #207. A lookout tower and additional buildings were added to the property after German U-Boats torpedoed freighters along the Treasure Coast in 1942.

The House of Refuge closed its doors from April 1945 until 1955 when the Historical Society of Martin County opened it in 1956 as a museum.

The House of Refuge is located at:
301 Southeast MacArthur Boulevard,
Stuart, Florida 34996

The museum is open Monday-Saturday from 10am-4pm and Sundays from 1 pm-4pm.